There are two prevalent notions that I hope to dispel today. The first is the common misconception that many natural medicines are gender specific. The reality is that it’s very rare to find a holistic remedy that applies only to men or only to women. Another popular but equally counterproductive belief is that there is no middle ground in terms of the efficacy of naturopathic medicine. A supplement or therapy either works or it doesn’t. Many think it’s a black and white issue – doctors and patients alike. But that’s clearly not what it is found in the scientific literature. All complementary treatments fall somewhere between “completely useless” and “genuine panacea”. This ultimate truth can make the analysis of alternative medicine a bit complicated and, often times, messy. But that’s where the real answers are found – in the murky land of details. 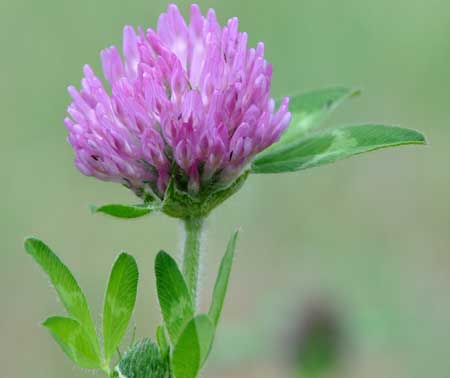 2009 was a rather interesting year for a plant commonly known as red clover (Trifolium pratense). A Turkish review from March describes its historical use as an antiseptic, an expectorant (a substance which helps expel mucus from the lungs) and a pain reliever in rheumatic conditions. The authors of the summary go on to point out that in more modern times, red clover has “gained popularity due to research into its use for the treatment of menopausal symptoms”. (1)

A study published in the November 28th edition of the journal Maturitas examined the mood modifying effects of a red clover extract vs. a placebo in a group of 109 postmenopausal women. The trial lasted a total of 90 days and utilized a twice-daily dosage of 80 mg of red clover isoflavones (phytoestrogens) or a similar looking placebo.

Measures of anxiety and depression were quantified at baseline, after 90 days and at the completion of the study using standardized psychological scales. The women receiving the red clover demonstrated an average of a 77% reduction in Hospital Anxiety and Depression Scale scores and an 81% decline in the Self Rating Depression Scale. During the placebo phase of the study, only a 22% overall improvement in anxiety and depression was observed. (2)

Unfortunately, there have also been several recent studies that did not find positive outcomes when comparing red clover to conventional medications and placebos. Here’s a review of what I found:

All scientific studies involving natural medicine need to be taken seriously (unless there’s a credible reason not to). This applies to both “positive” trials and those that result in disappointing conclusions. If there’s clearly bias in the design of a study or on behalf of the scientists conducting a study, then I think it’s absolutely essential to point that out. If however, there is no obvious failure in the research itself, then we must consider the strong possibility that the intervention (be it a supplement or therapy) is responsible for the poor outcome. In the long run, it doesn’t do anyone any good to be an apologist for natural medicine regardless of the facts.

Having said all that, there are a few legitimate factors that need to be considered when evaluating the previous, negative trials. The first question that springs to mind is whether or not the researchers were using reliable red clover supplements. An October 2009 paper in the journal Menopause tested “19 different isoflavone-containing preparations” in order to determine their ability to bind to hormone receptors. During the testing process this group of Austrian scientists discovered that only 5 of 19 supplements contained the level of isoflavones that were claimed on the product labels. This begs the question: Did the products used in the negative studies provide an adequate level of the active ingredients? Then there’s the issue of how well various red clover products are absorbed in the human body. A recent evaluation uncovered a wide disparity in product composition and absorption rates among various red clover products distributed by well regarded manufacturers. This is a potential “black eye” for both the scientists overseeing these negative studies and the manufacturers that produce said unreliable supplements. (7,8)

The latest issue of the journal Aging Male provides a reminder that red clover isn’t just for women. The German authors of that review point out that “isoflavones may protect the prostate to make it less prone to develop cancer”. Animal studies certainly suggest this is a real possibility. But there are also human trials that give cause to consider the use of red clover in men. A 2008 study in the journal Urology found that a 60 mg daily dosage of red clover could effectively decrease PSA (prostate-specific antigen) levels by 33% and prostate volume from 49.3 cm3 to 44.3 cm3. An overall improvement in The International Prostate Symptom Score (from 7.9 to 6.68) was also documented in that work. There were no detectable changes in sex hormone levels or sexual function over the course of the 12 month study. The authors remarked that “Daily administration of 60 mg of an isoflavone extract was well tolerated”. However, there was an indication of an increase in liver transaminases after the 3 month mark. Therefore, it was concluded that urologists should err on the side of caution and keep an eye out for any liver or PSA related shifts in men using red clover. (9,10,11,12)

A few preliminary studies have additionally discovered potential cardiovascular benefits in red clover users. A clover extract rich in an isoflavone known as biochanin has been shown to reduce LDL (“bad”) cholesterol in men but not women. A different red clover component (formononetin) has previously been found to combat arterial stiffness and “total vascular resistance” in men and women. These combined effects may be the reason why some research supports the hypothesis that phytoestrogens may decrease the risk of heart disease in Asia and other populations that consume an isoflavone-rich diet. (13,14,15)

Thankfully, new research on red clover is forthcoming. For instance, a just released experiment has determined that an extract of red clover may help discourage inflammation and angiogenesis, a process by which cancer can grow and spread. Because of this, some scientists are openly discussing the suitability of using this plant “not only for menopausal complaints”, but also as a “powerful chemoprotective agent against chronic disease e.g. which have a high incidence especially in elderly females”. Furthermore, a group of Australian scientists have even proposed using red clover in the current fight against the H1N1 flu pandemic because of its anti-inflammatory properties. These types of exploratory studies and others open the door for using plants such as red clover in a much broader context than just menopause. I’ll look forward to seeing where red clover takes us in 2010 and beyond. My hunch is that it’ll continue to be an interesting trip. (16,17)