Today I’m very happy to present part one of my interview with Dr. Loren Cordain of Colorado State University. Dr. Cordain is widely regarded as the preeminent authority on paleolithic nutrition – a dietary approach which aims to practically replicate the eating style of humans “prior to the Agricultural Revolution (a mere 500 generations ago)”. A Paleolithic menu primarily consists of lean meats, seafood and low-glycemic fruits and vegetables. It’s naturally rich in antioxidants, dietary fiber, phytochemicals, omega-3 fatty acids and protein. As one might expect, it discourages the consumption of many of the controversial elements of modern diets including artificial flavors and sweeteners, dairy, grains, hyrdrogenated fats, processed foods, salt and sugar. The net result of adopting such a diet is often a dramatic improvement in conditions ranging from acne to osteoporosis. 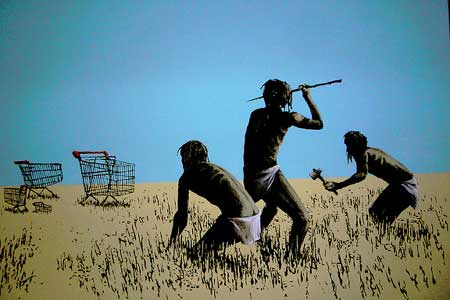 JP – Your view of nutrition appears to put you at odds with today’s most popular diet plans such as those advocated by many low carbohydrate authorities, the USDA Food Pyramid and vegetarian advocates. How are you generally received by your colleagues in the nutritional field?

Dr. Cordain – First off, let me separate myself from your characterization of “popular diet plans” such as those you mention (the USDA Food Pyramid, low carbohydrate authorities and vegetarians).  The dietary recommendations for each of these three ways of eating have been synthesized by either charismatic individuals or governmental organization (e.g. Atkins – low carbohydrate; the USDA – The Food Pyramid; Dean Ornish, T. Colin Campbell and others – vegetarian/vegan diets).  Accordingly, they and their message are vulnerable to human biases, errors and frailties.  As the evolutionary biologist, Theodosius Dobzhansky stated “Nothing in biology makes sense except in the light of evolution”.  Hence, the basis for optimal human diet lies in the evolutionary history of our species and the consequent selective pressures which shaped our genome, rather than the opinions of individuals or organizations. Without consideration of these evolutionary and genetic factors humans will surely err in their recommendations for healthful modern diets. Hence, the optimal human diet was shaped by natural selection through eons of evolutionary experience and is not a function of either governmental policy or ever changing human perspectives on diet. I did not synthesize a new “diet revolution”, but rather (with numerous scientists worldwide) uncovered the original diet to which our species is genetically adapted. By analyzing the dietary characteristics and ranges of the world’s hunter gatherers, we have gained insight into how the current western diet varies from that to which we are genetically adapted.

From a logical perspective, your question lacks objectivity.  Clearly the USDA nutritional recommendations vary from those of low carb advocates as well as vegans.  None of these three groups are in agreement with optimal dietary recommendations, so it serves little function to point out that all three of these camps are probably not in agreement with the evolutionary basis for optimal human diet. Human and governmental policies are biased by our cultural and intellectual frailties. Evolution through natural selection knows no such biases. Hence to take Dobzhansky’s statement one step further, nothing in nutrition makes sense except in the light of evolution, as nutrition is an applied sub-discipline of biology. (1)

JP – You currently have three books in publication (The Paleo Diet; The Paleo Diet for Athletes; and The Dietary Cure for Acne). What are the primary differences between the three in terms of dietary composition?

Dr. Cordain – Basically, all are similar. The Paleo Diet for Athletes varies slightly from the other two books in its recommendations to increase dietary sources carbohydrate to fully top off intramuscular glycogen stores.

JP – How do you find the right balance between staying true to historically-based nutrition while still incorporating the latest scientific findings? Do you sometimes find the two are at odds with each other?

Dr. Cordain – History implies a written language. Hunter gatherers were illiterate, so our observations of their diets and nutritional patterns come from ethnographic and anthropological observations as well as the archaeologic record. Clearly, we cannot eat a pure stone age diet, as these foods (wild game and non-domesticated plant foods) are either unavailable or distasteful to our current dietary biases. However, having said this, it is entirely possible to mimic the nutritional characteristics of hunter gatherer diets with everyday foods available in the supermarket.

JP – I’ve been following the recent findings about so-called “alternate day fasting” and “intermittent fasting”. Do you think that moving away from a modern, three-meal-a-day menu plan has a place in the paleolithic model of nutrition?

Dr. Cordain – The available evidence suggests that there likely were two norms for meal patterns in foragers. First, a large single meal at the end of the day wherein the hunters brought their spoils back to the group and/or the gatherers brought their food back to the group for a central meal. Men almost always were the hunters, whereas women, children, the elderly and men were the gatherers. If food existed in camp then everyone stayed in camp and tended to nibble and snack all day long. Hence three formal meals were not the norm and intermittent fasting was a common pattern, particularly among the hunters.

JP – Can you please share your point of view about the relative merits of grass-fed meat as compared to conventional, grain-fed meat?

Dr. Cordain – I’ve written a paper on the topic which is available at my website.

JP – Is there any role or value in practicing stress management techniques as an adjunct to the type of traditional diet and lifestyle you advocate?

Dr. Cordain – This question is out of my area of expertise

JP – In 2004 and 2006, you co-authored two articles about the cardiovascular benefits of maintaining low LDL cholesterol levels. What is your current view on this issue?

Dr. Cordain – Similar, except that the LDL should be fractionated into small dense LDL and the fluffier, less dense LDL. Small dense LDL represents a greater risk for cardiovascular disease than does fluffy LDL. (2,3)

Just over a month ago I implemented an alternate day fasting (ADF) regimen into my health care program. I’m combining the ADF eating pattern along with a carbohydrate restricted diet. It’s my belief that integrating these two techniques will result in better results than either in isolation. In the coming months, I’m considering incorporating a Paleolithic bent to my dietary program. The preliminary and theoretical research I’ve seen on Paleo-style diets appear to offer a sound basis for doing so. In addition, it simply makes sense to me that many people would do better eating traditional foods with which our bodies are most familiar. I’ll make sure to keep you all abreast of the personal findings in my own nutritional journey. In the meantime, I highly recommend that you visit Dr. Cordain’s informative and well-referenced website (www.thepaleodiet.com) and consider his compelling point of view and research.