Summertime is berry-time. This year, several encouraging studies have accompanied the seasonal influx of these succulent fruits. My Healthy Monday tip of the week is to include more fresh and frozen berries in your diet in the hope of reducing the risk of blood sugar and cardiovascular danger (metabolic syndrome), liver dysfunction, poor cognition and various forms of cancer. 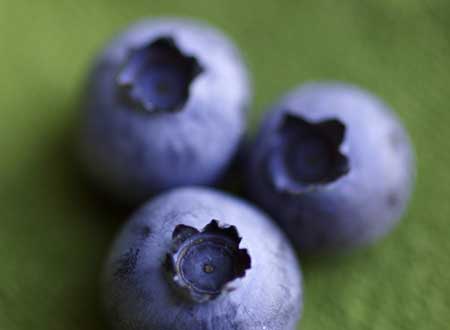 While scouring through the medical literature, I came across five reasons why many of us should include more richly pigmented foods such as berries in our daily diets. Some of the greatest health threats currently affecting mankind appear to be directly influenced by naturally occurring phytochemicals in this family of fruit.

A study presented in the April 2010 issue of the Journal of Agricultural Food Chemistry evaluated the effects of “daily consumption of wild blueberry juice in a sample of nine older adults with early memory changes”. The 12 week intervention determined that blueberry juice intake improved a few key aspects of cognitive functioning – associate learning and word list recall. As an added bonus, the researchers noted a reduction in depressive symptoms and a decline in blood sugar levels. (1)

Two recent publications appearing in the journals Cancer Research and Cancer Prevention Research indicate that: a) blueberry extracts effectively reduced breast tumor growth and tumor weight in a mouse model of breast cancer; b) rats fed a diet rich in black raspberries, blueberries and ellagic acid (a component found in many berries) also “suppressed mammary tumor incidence (10-30%), volume (41%-67%), and multiplicity (38%-51%)”. The secondary study determined that the berries and ellagic acid specifically inhibited the levels of estrogen metabolizing enzymes which play a pivotal role in the early stages of breast cancer formation. (2,3)

An investigation of 230 patients with gastric cancer and 547 patients who were cancer-free established a strong connection between high intakes of fruits rich in flavonoids and proanthocyanidins and a reduced risk of stomach cancer. Food frequency questionnaires and “unconditional logistic regression models” were used to compare the diets of the respective groups of study volunteers. A risk reduction of between 56% to 64% was found when comparing patients with the highest intake of flavonoids and proanthocyanidins to the those in the lowest quintile. (4)

A 4-year study known as the Polyp Prevention Trial was recently completed. It assessed the relative impact of a low fat, high-fiber, high-fruit and vegetable diet in relation to pre-cancerous polyps. A sub-analysis looked for specific dietary components in 872 patients who participated in the original intervention. Researchers from the National Cancer Institute discovered that several flavonoids commonly found in berries (isorhamnetin, kaempferol, and quercetin) were associated with lower levels of a proinflammatory substance known as IL-6 (interleukin-6) which serves as a risk indicator for colorectal cancer. This suggests that higher berry consumption may protect against cellular activity that is consistent with colon cancer development. (5)

One of the more compelling aspects of berries is their unique ability to affect the body in a slightly different way than many other fruits. An example can found when examining the effects of fructose intake on liver health. Ingesting large amounts of “fruit sugar” or fructose can encourage the development of nonalcoholic fatty liver disease. And berries, like all other fruits, contain some fructose. But they don’t seem to adversely affect liver. In fact, quite the opposite is true.

The June 2010 issue of the European Journal of Clinical Nutrition reports that the addition of 6 ounces of northern berries to the diets of 28 diabetic women resulted in a significant benefit in liver function. The trial lasted a total of 20 weeks and included a comparison or control group of 30 women who did not consume any added berries. A 23% improvement in a liver function marker, ALAT or aminotransferase, was noted in the berry group alone. There was also a significant elevation in adiponectin concentrations which is suggestive of improved blood sugar control and cardiovascular health – collectively referred to as metabolic syndrome. (6,7)

I hope today’s column will inspire you to go out buy some fresh berries in the coming weeks. But don’t just buy any berries. Look for organic varieties, as many conventionally grown berries contain unacceptably high levels of pesticide residues. If you can’t afford or find fresh, organic berries then look for “fresh frozen” varieties that are available year round. They’re more economical and function beautifully in many recipes including homemade fruit preserves and superfood smoothies. (8)