This past weekend a client consulted with me about how to select healthier food options when dining out. In practical terms this often means asking for substitutions for starchy and/or sweet food items. For example you can request to have a side of grilled asparagus or wilted spinach instead of pasta or risotto. However this suggestion sometimes segues into a common concern among those trying to lose weight or otherwise improve their health. “You mean I can never eat risotto again?!” The short answer is, “Of course you can”. But the more nuanced response is that such delicacies should probably be saved for special occasions and not be eaten as a regular part of your menu plan. 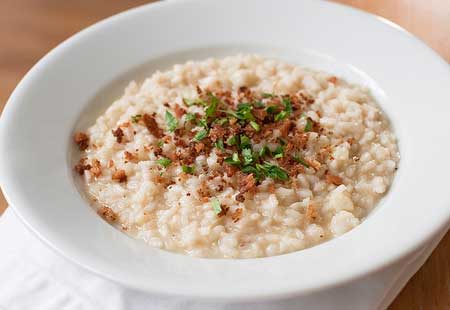 Another way of making dietary substitutions is by re-creating a recipe with more nutritious ingredients. In the case of risotto, I’ve found that you can carefully modify cauliflower to yield a rice-like consistency. By doing so you effectively transform a side dish that’s normally loaded with starchy carbohydrates into a genuinely healthy, low carb alternative.

Cauliflower is a popular member of the cruciferous family of vegetables which also includes bok choy, broccoli, Brussels sprouts, cabbage, kale and radishes. Recent scientific inquiries have uncovered potent phytochemicals in these “superfoods” which may discourage the formation of a variety of malignancies such as colorectal cancer, lung cancer, lymphoma, ovarian cancer and prostate cancer. (1,2,3,4,5)

On the other hand, frequent white rice consumption is a major contributor to the glycemic index and glycemic load of many unhealthy diets. Not surprisingly, this style of eating has been implicated with the “deterioration of glucose metabolism”, “a high prevalence of type 2 diabetes” and heart disease. (6,7,8)

3 oz of organic half and half

NutraSalt or salt to taste

Thaw two 10 oz packages of frozen cauliflower in a colander. Place the drained, thawed cauliflower florets in a food processor and pulse (on the chop” setting) until they reach the consistency of rice granules. Mince 3 garlic cloves. Place one tablespoon of organic butter and one tablespoon of organic extra virgin olive oil into a sauce pan and heat on a low-medium setting for about one minute. Add the “cauliflower rice” to the garlic-oil mixture and stir well. Salt and pepper to taste. Cover and cook for about 10 minutes, stirring several times along the way. Add the half-and-half and cheese blend and incorporate well. Continue to cook and stir for an additional 3 minutes or so without the cover on.

The proposed chemoprotective properties of cruciferous vegetables are fairly well established in the medical literature. But these powerhouse veggies shouldn’t only be thought of as cancer fighters. Several recent studies specifically single out vegetables such as cauliflower as having a positive impact on brain-related conditions as well. A paper published in the April 2010 edition of the Archives of Neurology includes cruciferous vegetables in a list of foods that may confer a preventive effect with regard to Alzheimer’s disease (AD). The remaining members of the noted AD-protective diet also includes dark green leafy vegetables, fish, nuts, poultry and tomatoes. A trial appearing in the October 2009 issue of the British Journal of Nutrition concluded that higher intakes of crucifers reduced the risk of cerebrovascular disease by 21%, ischaemic stroke by 33% and intracerebral haemorrhage by 51% in a group of 3,932 middle-aged and senior men and women. Finally, an experiment presented in the journal Neuroscience Letters determined that administering sulforaphane, a phytochemical present in cruciferous vegetables, improved recovery from traumatic brain injury and enhanced cognition in an animal model. (9,10,11)

It should be noted that hypothyroid individuals are often cautioned against eating large amount of crucifers because they’re rich sources of goitrogens which can interfere with thyroid hormone production. However, the cooking process and maintaining adequate iodine intake may reduce this thyroid-specific threat. Still, anyone with a diagnosed or suspected thyroid disorder should consider discussing this issue further with their health care providers just to be on the safe side. (12,13,14,15,16)

You can include cauliflower risotto in meals just as you would traditional risotto. It’s a great accompaniment to any type of grilled fish, roasted chicken and even stewed beef or pork. And since you’re using it as a replacement for a starchy element, it still allows you to add an extra vegetable to your meal if you so choose. Picture this on a plate: slow cooked short ribs in a rich, reduction sauce and a side of roasted asparagus on top of a small mound of cauliflower risotto. Pour yourself a glass of biodynamic or organic red wine and you have yourself a feast that will nourish your body and mind. Now that’s my idea of being on a “diet”.