Recently, I was having dinner at a restaurant and noticed several types of “stuffed potatoes” on the menu. If you’re unfamiliar, the name basically tells it all. A baked potato is cut open and some of the insides are scooped out and then replaced with a variety of fillings such as bacon, broccoli, cheese, chili and sour cream. The end result can be rather delicious and the price is usually right because it’s quite filling. But since I no longer eat potatoes I quickly moved on to other, more nutritious options on the menu. 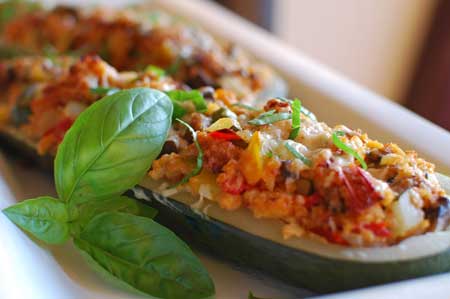 Flashforward to the present where I’m trying to come up with yet another health promoting recipe for my readers. All sorts of thoughts run through my mind. What have I eaten lately? Anything memorable? Are there any foods I’ve been researching that would be interesting? What kind of recipe would I like to make if only it was healthy? Then it hit me: stuffed potatoes without the potato and with a Mediterranean twist.

When I turn my attention to a geographic destination I can sometimes find culinary inspiration. The Mediterranean region is widely known for using specific herbs and vegetables in its cuisine. What’s more, many of these foods and seasonings are believed to contribute to the numerous health benefits attributed to this particular way of eating. This is precisely why I’ve chosen to replace potatoes with zucchini and conventional potato stuffings with the antioxidant-rich herbs: basil, oregano and rosemary. (1,2,3)

Zucchini lends itself beautifully to stuffing. But, more importantly, it allows one to replace a starchy vegetable which is very high in carbohydrates with a low-carb vegetable which is loaded with valuable phytochemicals. Scientists have identified zucchini as being a good source of carotenoids and phenolic antioxidants. These are non-nutritive, plant chemicals which have been shown to protect against various degenerative diseases and possibly even cancer and cardiovascular disease. (4,5,6,7,8)

Among the herbs I used in today’s recipe, basil has documented antibacterial, antihypertensive and circulation enhancing effects. Preliminary experiments suggest that oregano may discourage the development of artherosclerosis and metabolic syndrome which is characterized by “the coexistence of obesity, hyperglycemia, hypertension and hyper/dyslipidemia”. Finally, rosemary has recently shown promise in reducing the risk of liver cirrhosis, neurodegenerative conditions such as Parkinson’s disease, and it may even assist with weight management by limiting the digestion of dietary fat via “inhibition of pancreatic lipase activity”. (9,10,11,12,13,14,15,16,17)

Nutrasalt or salt, if desired.

Carotenoids May Promote Stronger Bones in Men and Women

Begin by allowing the goat cheese to reach room temperature. Pre-heat the oven to 450°F. Slice the zucchini down the center and hollow out the interior using a melon scooper or spoon. You want to leave approximately 1/4″ of the surrounding zucchini. Set aside the zucchini centers and rough chop them along with the basil, rosemary and sundried tomatoes. In a bowl, thoroughly mix the goat cheese, herbs, tomatoes and zucchini centers. Add salt and pepper to taste. Generously pack the filling into the hollowed zucchini halves. Then place the stuffed zucchini onto a baking pan. Bake for about 20 minutes. Use the broil setting for the last few minutes if you’d prefer a crispier finish.

You can enjoy these Mediterranean Stuffed Zucchini as a main course or a side dish. Initially, I envisioned them occupying the part of the plate typically reserved for baked potatoes. However, when I tried them I was surprised at how filling they were when eaten alone. Part of the reason is clearly their robust nutritional profile. But, I think the texture also has something to do with it. Adding back the zucchini centers and the sundried tomatoes, which have a meaty consistency, may elevate this recipe from a side dish to an entree for some people. Either way, I think this recipe is a good example of how you can increase your antioxidant and vegetable intake while replacing a far less healthy menu option.